What Am I Reading? 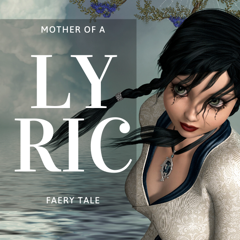 Writers are told they will become better writers if they are also readers. While I’m working on my supernatural, new adult novel, The Knight in Tights, and the sequel to my supernatural YA/new adult sequel to Reno Red, I’m also reading…and listening.

I’m listening to an awesome podcast of a YA drama, Lyric Mother of a Faery Tale. The podcasts will be approximately 15 minutes each—perfect to listen to on the exercise bike, treadmill or anywhere really.

I highly recommend it. Click HERE for the link.

This is Lyrics summary:

Lyric is a 16-part YA audio drama about Ashley Scott, a college student whose life is magically transformed when her family legacy falls on her young shoulders. She planned to survive the summer working odd jobs around Eden College campus, but when mystical beings and reality collide, she’ll settle for keeping her sanity.

Besides the podcast, I have been reading, too. I like paper vs. tablet. Call me crazy.

I also just finished Hear the Wind Sing (100 pages), and the second book of the trilogy Pinball, 1973 (135 pages) by Haruki Murakami. I don’t know how to describe the works, kind of like the Seinfeld show that was “about nothing,” but the books held my interest—and isn’t that what books are supposed to do.

Next up, Louise Penny’s Still Life, a Chief Inspector Gamache Mystery. Her series was recommended to me by a friend who read it in her book club.

I recommend any books/podcasts above. Please share what you have been reading. I’d be interested to find more good series.

Wacky, Weird, Wonderful, and Helpful, too! 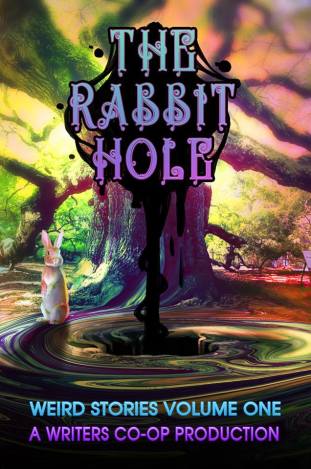 What happens when you ask a group of writers to write something weird? The Rabbit Hole: Weird Stories Volume 1. This anthology is a wonderful collection of stories and poems that showcase weirdness.

The best part of The Rabbit Hole is that is will be helpful. A percentage of the sales will help to fund mosquito netting in countries where malaria is a huge problem. A small book at a small price can help to buy a small net to save small children from a small insect. The Against Malaria Foundation provides the nets and the gruesome statistics on malaria.

The paperback will be released soon on Amazon, but you can buy an electronic copy now.

Enjoy the weirdness, and thank you in advance if you decide to purchase a copy. 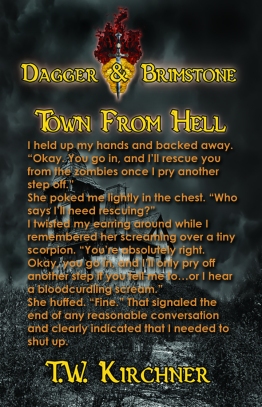 Ashley’s Bookshelf has been awesome in posting author interviews for indie authors. You can read about Town from Hell at Ashley’s Bookshelf, my favorite character from the book, some writing quirks, and my advice to writers.

Ashley’s Bookshelf, listed as a reviewer on The Indie View, features in-depth book reviews for paranormal, sci-fi/fantasy, romance, Christian fiction, YA, mystery, and suspense as well as cover reveals. 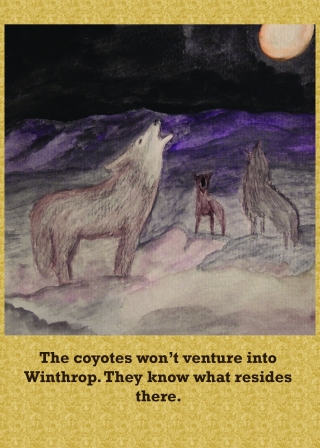 Read an excerpt from Dagger & Brimstone: Town from Hell at Fallen Over Book Reviews. It will give you an idea why the coyotes won’t venture into Winthrop.

Have you ever had a nightmare and were able to remember it?

Welcome to the Fluffy Bunny… 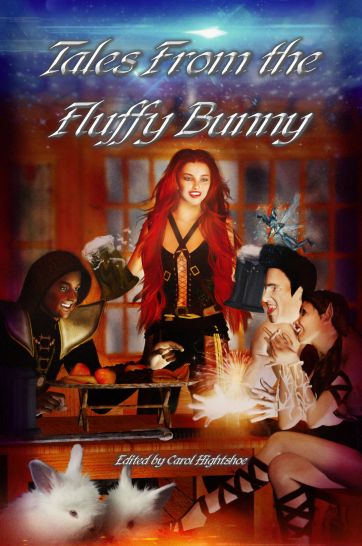 Welcome to the Fluffy Bunny, an adventurer’s bar, named after the blade used to slay the ancient dragon Thorenoak. The Fluffy Bunny is a place where tales are spun. Pull up a chair and join in on the adventure.

Among the wonderful tales about unusual names are A Pirate’s Dragon Tale. Find out what or who Puddles is and why the moniker.

Writing tips and bearded men in one blog—just go with it. To make a fictional story come alive, writers need to create meaningful and memorable characters. The best characters, bearded or otherwise, are the ones that make the readers feel emotion while they read. If a protagonist is well-written, readers will want them to overcome conflict. They will feel heartbreak at a character’s misfortune. Readers will turn pages in hopes their beloved protagonist wins in the end. Unless, or course, the reader doesn’t like the protagonist.

Characters need a variety of traits. A character who is courageous and humorous could also be obnoxious and selfish. Antagonists shouldn’t be perfect, just like everyone else. Tony Stark saves the world and is likable, but he is a bit egotistical, too. However, egotistical people may not see a big ego as a flaw. Creating characters with a mixture of different traits allows readers to decide for themselves if they like a character or not.

Creating a great character takes a lot more effort than describing what they look like. For example, “the older man with a beard” could describe many guys, including the band ZZ Top and Santa. To add a little fun to this informational blog, here’s a history lesson that involves older men with beards. The answers will be at the end of the blog.

See if you can name all the bearded men. Getting all of them correct would be amazing. A score of five, six, or seven is impressive. Two to four correct answers is probably average. One correct answer is bad. 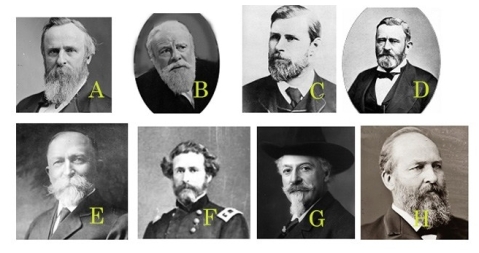 Writing that is done well takes a lot of hard work. Many people underestimate what a good writer can do to make a story come alive, sway opinions, or make a company look good. It is a craft. It takes time, effort, and multiple revisions for writers to get an article, essay, or story from an idea to a finished product. Yet, many writers get paid .01 per word for their effort. This article would be worth $4.29.

A. President Rutherford B. Hayes

B. Edmund Gwenn (Santa from the original movie Miracle on 34th Street)

Give Wolves a Voice 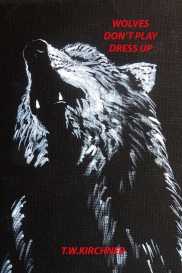 I love wolves. They are my favorite animal and are pretty amazing when you take the time to learn about them. Unfortunately, they have received a bad rap for centuries. Fairy tales, other literature, and movies portray them as bloodthirsty killers. The creation of werewolves didn’t help their cause either.

Years ago, I wrote a story that would make wolves the good guys for once and educate people on some wolf facts. The story is too long to be a picture book and too short to be a book, so it has stayed in my laptop. Target stores is hosting a short story contest through Wattpad, looking for modern-day stories that involve a fairy tale or myth. It is perfect for my story, so I submitted it.

Since my following on Wattpad is small and only votes will push the story to the next level, it doesn’t stand a chance right now. If you would like to help me give wolves the voice they deserve, check out Wolves Don’t Play Dress Up. If you think it’s deserving, give it a vote. Thanks so much!

Try Before You Buy

Wattpad is an interesting website that allows you to read part or all of a book without spending any money. As a writer and a reader, I created my free account, posted some of my work, and built a library of other authors’ works. Some of my posted work in available on Amazon while others are only manuscripts that I hope to have published one day. Check out the Wattpad site and see what you think.

Why Write a Book Review?

Book reviews have taken on a whole new meaning for me since I’ve become a published author. Before any of my work was published, I didn’t always write a review for books I’d read. Shame on me. What I didn’t realize at the time is how much the review would mean to those authors—the old quote ‘walk a mile in someone else’s shoes’ caught up with me.

How Reviews Help an Author

I can’t speak for all authors, especially best-selling ones, but I can for myself and a few close author friends. We love reviews and getting feedback on work that we’ve toiled over for years. Bad reviews aren’t our favorite, but I’ve actually had one of my friends laugh off a bad review. He said it made other people want to read what was so bad about the book. One of my favorite reviews was written by a 10-year-old who had read my young adult/middle grade book The Troubled Souls of Goldie Rich: The Zombie Next Door. She gave my book a good review and wrote how much she loved it. Nailing the material for the age group it’s written for is what I strive to do as an author. Her review confirmed that for me.

Accumulating book reviews is also great advertising for authors. Word of mouth can’t be beat in my opinion. Who doesn’t ask family and friends for advice or opinions? Reviews also can translate into increased sales and unlock better promotions for books from sellers as well.

How Do Book Reviews Help Readers

As a reader, I choose a book by its subject matter, which I gather from the back cover and readers’ reviews. Sometimes, I admit, I’m sucked in by an amazing cover, but the book has to pass the back cover test to actually get purchased. For me and many other readers, we use reviews to determine if we really want to spend our time and money on a book. A glowing review can seal the deal for me, especially if someone knowledgeable on the subject recommends it. I was very excited to get a wonderful review from Cindy Vallar, author, editor, and historian of all things pirate. In her monthly maritime history column entitled Pirates and Privateers, she posted the review of my middle grade book Pirates Off the Deep End.

I’ve walked in an author’s shoes and have been seen the light. I actually went back and wrote reviews on Amazon for books I’d read years before. Even if a book isn’t your favorite, there is probably something worth mentioning that is positive about it: good characters, fast-paced, kept my interest. To say a book ‘sucks’ without elaborating doesn’t help an author or anyone trying to learn something from your review. More useful information would be ‘I couldn’t connect with the characters’ or ‘the plot wasn’t believable.’ A simple, three-sentence review can tell a lot. Keep in mind most authors spend several years and countless hours on each book, and granted, we realize not everyone will love our work, but respect and common courtesy is always appreciated no matter what your profession.

I may never reach my goal as ‘a best-selling author’, but as long as good reviews trickle in, I’ve done my job as an author to entertain readers. So keep this blog in mind the next time you read a book, and spend a few minutes typing your opinion of it. It’s not only your chance to make your opinion count, but your time and energy will be appreciated.